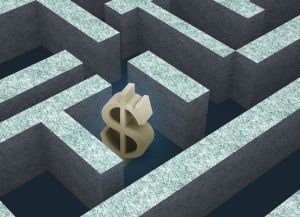 The year 2012 had many investment twists and turns, where navigating the opportunities and pitfalls was once again a full time job.  Consider the variety of factors that caused ripples in markets at one time or another during the year:

Investment markets climbed up the wall of worry in 2012 and posted respectable returns (see page 2 of this newsletter for more details), despite all of these factors.

However, most retail investors once again sat on the sidelines or further reduced their equity holdings (see Chart I below).  The net result for most investors was a muted or even negative return. 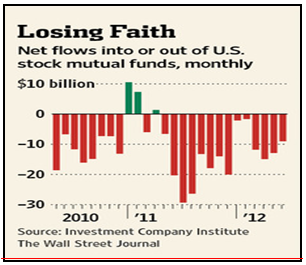 Don’t believe all those “know-it-alls” who claim they keep buying all the right stocks.  The reality is most investors continue to miss out on the multi-year rally that began in March of 2009, awaiting the “all clear” signal, which is always too late. These individuals are continually shaken by the risks in the market, and have a tough time believing they will be resolved in the future.

2012 sure did test an investor’s resolve, with markets dropping 10%+ from April to June and 8%+ from September to mid-November.  As per usual in bull markets such as our current, it is a process of 3 steps forward and 2 steps back, with the weak hands getting shaken out during times of fear.

We are proud that our clients all stuck to the program in 2012, and generated a return far in excess of sticking their cash under the mattress.

Markets Down, Portfolios Up!

Heading into Q4, our indicators suggested that markets had a decent chance of pulling back a bit before rallying into year-end.  Consequently, we began the quarter with a smaller weighting to equities in portfolios.  As per our longer-term themes, we remained overweight in emerging markets and the US, while underweighting Europe.

In fixed income, we began reducing some of our high-yield bonds as the “stretch-for-yield” rally appeared to be getting long in the tooth.

We also held on to our short US treasuries positions.  With our Volatility Timing Model, we exited all positions as indicators were mixed.

Our predictions proved accurate early in the quarter with a pullback and then rebound.  However, the fiscal cliff threats truncated the rebound into year-end.

As a result, we rapidly adjusted portfolios, and ended the quarter with net gains to client accounts, despite a down US market.

Client portfolios had positive absolute returns for Q4, despite negative returns in the benchmark indexes.  This was a good showing for the quarter as many of our longer-term themes began to generate the returns we expect from them.

For the full year of 2012, net returns were above historical averages, as relief rallies began to kick in where investments were significantly undervalued (e.g. emerging markets).

We continue to believe that large investment opportunities exist outside of US equities, and look for those trends to continue in 2013 and years to come.

It was once again a year of ups and downs, but our faithful, patient, and disciplined clients were once again rewarded with some solid returns for the year.  Here’s to more ahead!

There are many reasons to be optimistic about 2013, especially if markets can continue to look past political wrangling in Washington DC.

To begin, the US economy is gaining strength, with major banks continuing to heal their balance sheets and the housing market strengthening nationally.

Additionally, large new supplies of domestic energy are coming online, resulting in a moderation of oil and gas prices, even as demand picks up.  This excess supply dynamic was not in place over the past decade when a rising economy meant spiking oil & gas prices, which in return capped economic expansion.

Today, the sky is the limit, and US manufacturers are experiencing rapid growth.

Overseas, the EU still has a ways to go in resolving its debt crisis, but appears to have gotten the upper hand over market vigilantes that had previously forced lending rates to skyrocket.

Finally, emerging markets appear to be rebounding from lows, especially in China.

And yet, there are always risks.  The biggest current risk is ongoing US political bickering over the debt ceiling, our nation’s deficits and entitlements, and the tax code.  Intense negotiations are on the immediate horizon, and could result in a volatile Feb/March time period.

Consequently, we have booked some profits for clients and have partially hedged portfolios.  This positioning should allow us to further participate in continued market increases while also preparing for a better entry position should we get a politically-induced pullback in late Q1.

There are also the unknown risks that always arise.  These are more difficult to handicap, as we have nothing to anticipate and prepare for.  In this area, we rely more on what the market is telling us in our Active Trading Models, in order to react a bit faster than the crowd to newly developing and unanticipated situations.

Overall, we are bullish on 2013, especially if we can make it through the debt ceiling negotiations with some sort of solid long-term plan of fiscal responsibility.  With the added certainty for businesses, and a credible long-term plan, we believe 2013 could usher in the first “all clear” on both the investment & economic side.