A Stagnant Market on Declining Earnings

US equity and fixed income markets were flat during Q1, albeit taking a volatile path to get there (see Chart I).

Initial fears were replaced with confidence, and finally turned back to fears towards the end of the quarter. 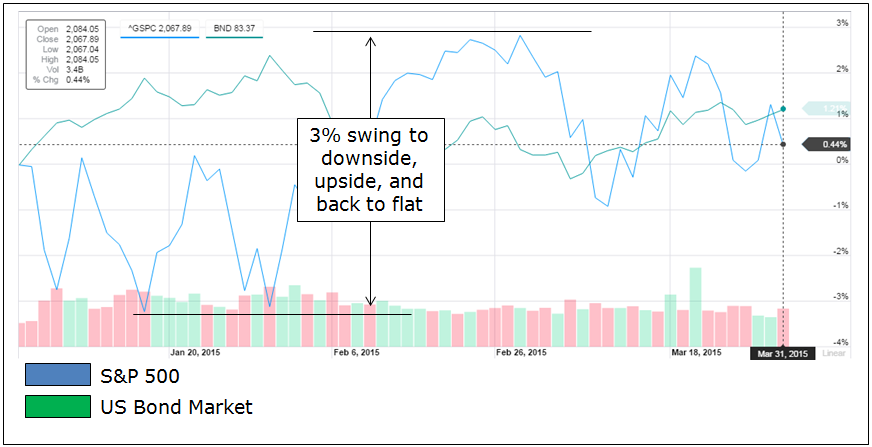 Outside of the US, foreign equities posted a solid return for the quarter after 9 months of declines, while commodities got walloped.  With markets being more and more driven by Central Bank manipulations, the US dollar rapidly surged on tighter policy expectations in the US and a new QE program in Europe.  As such, foreign multinationals looked more attractive relative to the US during Q1, and commodities priced in dollars took a plunge.

Looking back a little further than just Q1, increases in earnings helped to drive stocks higher over the past five years through mid-2014.  From 2010 through 2013, earnings were driven by productivity growth.  From 2013 through 2014 they were driven more by financial engineering (e.g. stock buybacks) driven by an unprecedented easing from the FED.

Typically, the next phase of the process is for stocks to begin to decline alongside earnings, especially when we are coming from an overvalued position.  However, final last gasp surges higher can occasionally result from the last few dollars getting sucked into an over-exuberant market (see “The Siren’s Song of the Market”).

We continue to keep a close eye on the situation, and have portfolios positioned accordingly.

For the past few quarters we have been highlighting the overvalued and overbought nature of US equity and fixed income markets.  As earnings have slowed, and now are in decline, stocks have begun to trade sideways with a lot of directionless volatility (see Chart I above).

For our tactical portfolios, we continued to underweight risk assets such as equities, commodities, and real estate, while holding extra cash, and carrying insurance against declines by being long volatility (VIX).

Simultaneously, we kept an eye on asset classes that had recently become more attractively valued, notably foreign equities and select commodities like oil.  As they stabilized, we took a few targeted investments in client portfolios.

Our global equity positions performed nicely, including investments in undervalued euro-zone areas like Germany and Italy, as well as emerging markets such as India, China, and Hong Kong.  Our diversifiers (merger arbitrage and absolute return funds) delivered small but positive returns as well.  Finally, our US equity investments were very marginally positive, similar to the S&P 500 index.

There were two meaningful drags on the portfolios during Q1, both of which were relevant for our Tactical – Absolute and Active strategies only.

The first was our exposure to commodities, which continued to decline.  Of particular note, we took a small position in the energy sector mid-quarter, when it appeared to be recovering from a massive 6-month prior price decline of 60% (from $110/barrel to $40-50/barrel).  While these energy positions rose for a few days, they subsequently began to decline once again, and our trailing stop approach triggered a sale for a small protective loss.

Even after a 60% decline, it is quite possible that declines could continue from current levels down to $20-30/barrel (50% lower from current levels).  As such, we felt it prudent to cut losses quickly and await a more attractive level for re-entry.

The second drag was our insurance against market declines, in the form of being long volatility (VIX).  This approach has helped portfolios over the past two quarters, but dragged in Q1/15 as the VIX index declined.  We believe this will be a major performer during the next bear market.

Nearly all portfolios in our Index, Global Rotation, and Tactical-Emerging strategies posted modest gains, with global assets helping to drive results above flat US returns.

Conversely, most Tactical – Absolute & Active portfolios posted small losses, with the energy trade loss and the VIX insurance costs negating out the positive gains from global assets.  We did generate a positive return for the quarter in HNW portfolios, as our multi-strategy approach delivered returns, despite being conservatively positioned.

Tactically, we continue to believe that caution is warranted, and we remain focused on capital preservation.  As declines occur, more opportunities will present themselves and while we are waiting, we continue to search for new opportunities in private equity, global assets, and eventually US equity & fixed income once they meaningfully decline.

Why cash is sometimes king!

It is interesting how cash can go highly into and out of favor at bottoms and tops of markets.  Where cash was king in 2008-2009 when markets were crashing, cash today is scorned. “I want to put my cash to work” is a common phrase used today, as it was used in 2007, and 2000 right before major market declines.

Right now, our view is that cash should be king.  Not only are markets peaking, with imminent declines ahead, but inflation is low and the rapidly rising US dollar (20% gain in last 6-9 months) is helping cash to be worth a lot more.  Priced in US dollars, buying gas is far cheaper today than it was a year ago, traveling overseas is cheaper than it has been in over a decade, and even real estate has started to level off in the last six months.

So enjoy your cash, as it goes farther today than it has in recent history. You will also relish your cash tomorrow when it provides a buffer against market declines, and then becomes the lifeblood of new investments at the bottom of the market cycle.

Until such time, we will tactically continue to search for more undervalued opportunities, but will never get sucked into the “putting all my cash to work” philosophy that is so strong at tops of bull markets.

For Global Index and Rotation portfolios, cash is not used as an asset class, but having cash on the side means that there will be an opportunity ahead to put money to work once the market eventually declines.