Buying the Dip in a Volatile Market – Good Idea? 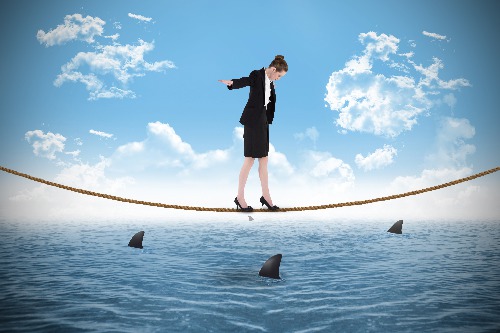 The Difference Between A Good Opportunity and Shark Infested Waters

We’ve been writing for years about the current global bear market, with the US having joined the fracas in mid 2015.

All in all, outside of the United States, global asset classes have produced negative returns for over five years now, with US negative in the last 10 months (see Chart I below). 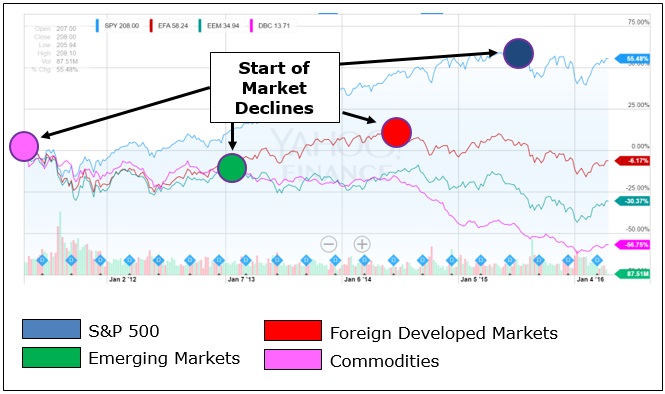 Building on this multi-year bear, downside pressure accelerated across most major asset classes in early Q1 2016 (see Chart II below through mid-February). 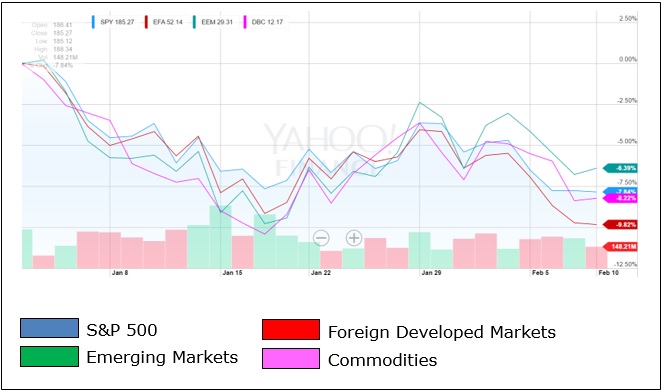 As selling pressures accelerated, the million dollar question for those with cash on the sidelines was, “should one buy the dip, or further protect against a potential nasty bear market accelerating around the globe?”

For more fully invested portfolios, the question was similar, “should one hold on for a rebound after losses, or get more defensive to protect against further declines, at the risk of missing out on the rebounds?”

Regardless of portfolio positioning heading into the declining, the question was whether to be more heavily invested after the dip, or to get/stay out?

When faced with such a scenario, how should one proceed?

Conventional wisdom would suggest that a dip should be bought, or prior losses should not be locked in by selling.

The benefit of this approach is that even when one is wrong, they don’t feel “too” bad because most others are down too…which feeds a bit into our herd-like tendencies as humans.

Others don’t think about the decision at all, as they are die-hard buy-and-holders.

This approach too is fine if you are ok tolerating major dips, with some historical periods including stretches of 10-30 years with flat to no returns.

A recent example was over a decade of 0% returns in the 2000s, and during the worst time periods markets declined over 90% and took multiple decades to recover previous highs (see Chart III below). 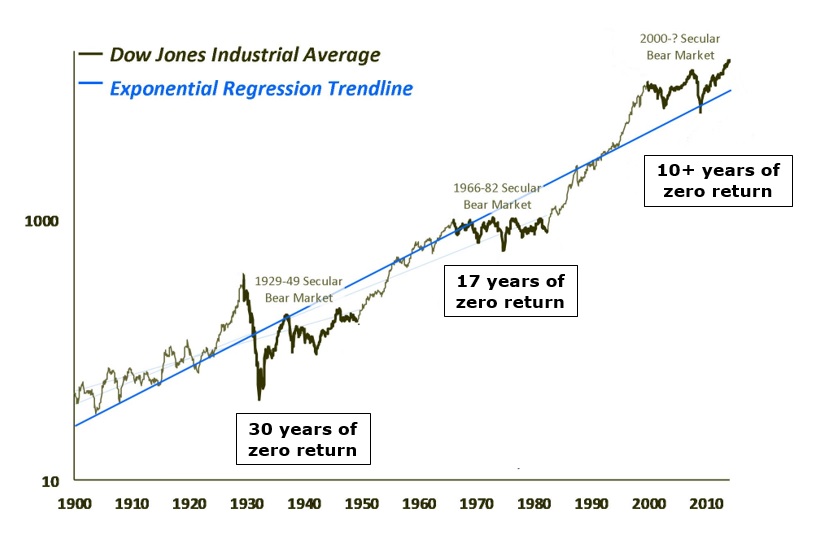 From our perspective, the decision to buy the dip or not should rest in facts and statistics, not “conventional” wisdom or one’s emotions.

More specifically, we believe that historically reliable valuation metrics can be used to make more informed and statistically-relevant decisions.

When engineers are designing cars, buildings, or airplanes, they all consider margins of safety to ensure the downside is protected against.

As investors, our margin of safety is in valuations.

The point is, we know that while individual companies can indeed go to zero (bankruptcy), entire countries and sectors do not go to zero.

So, if declines bring us to historically significant lows in valuations, we know that there is a margin of safety from the standpoint that a downside minimum should be near.

Right now, we are seeing these historical lows in emerging markets and select commodity markets, after gut-wrenching 3-5 year declines.

However, in markets that have only recently started to decline (e.g. US equity markets), the margin of safety is just not there as valuations are still quite high (see Chart IV below).

None of this is to mean that we can predict whether markets will indeed bounce off of lows or not.

What it does mean is that there is a good bet that a market near its historical valuation lows is a better candidate for buying the dip versus one that is still near its extreme highs.

Of course all markets can rebound, but it is a much better bet to go with the one near its historic valuation lows, as the higher valuation areas have a lot of downside potential that remains.

So…how did the rest of Q1 play out?

Well, this time there was a bounce, both in the US and in overvalued emerging markets and energy markets….with that bounce being larger for the more deeply undervalued assets.

…and what will next quarter bring, and the quarter thereafter?

Of course that is a loaded question.

No one can perfectly predict the future, but playing the odds will help us to weed out the opportunities versus the potential catastrophes

Remember, avoiding the major declines and sticking with your discipline is what results in 20-30 year long-term success for tactical portfolio models.

For Q1 2016, we once again entered the quarter very conservatively positioned in our tactical portfolios, with high levels of cash and market hedges in place.

In our more fully invested strategies, we weighted the positions to more conservative and undervalued asset classes.

As a result, when markets declined heavily in early Q1, our portfolios were very well insulated.

In mid-February, a number of our sentiment indicators hit extremely oversold levels.

As such, we decided it was time to buy the dip…

…but per our discussion in the previous paragraphs, valuations pointed towards dipping our toe into areas that had higher margins of safety through lower valuations.

As such, we purchased assets in the energy sector as well as in emerging markets, while holding off on still overvalued US sectors.

For the second half of Q1, we road the market move higher in all markets, albeit we still weren’t fully invested.

Finally, as markets once again approached overbought levels similar to the quarter’s start, we sold some assets to get more conservative again (see Chart IV below).

The net result of our moves include the following positive outcomes for Q1:

Separately, there were no fireworks, fanfare, or exciting action in our Private Investment Program…

…just the continued and consistent income that our clients have come to enjoy, with payouts monthly and quarterly in the various opportunities.

Our newest recommendation will be coming out in the two weeks ahead, as well as a follow-on offering from one of our previous recommendations.

More Turbulence and More Opportunity Ahead

While we can’t exactly predict the future, we do expect that the go forward environment will have some similarities to Q1 as well as some differences.

Mainly, we expect that US equity markets will continue to struggle for further gains as valuations remain stretched, causing additional volatility.

It is possible that we have a little more calm in the energy markets as the demand and supply equation comes more into balance.

Similarly, we expect emerging markets to find a bit more support given their low valuation levels and renewed support in China’s economy.

Regardless, we will continue to monitor markets on your behalf, and when opportunities present themselves, we will be decisive in putting your money to work.

The upcoming 12-24 months are poised to be very interesting, and should benefit from the exact types of tactical strategies that we employ.