The Aging of a Cyclical Bull Market 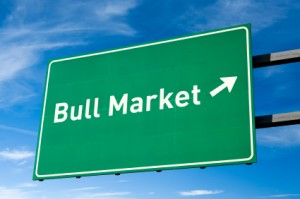 US and International developed market equities are setting marginal new highs, after short pauses during Q1/2014.  The bull market is now at 63 months duration versus an average of 42 months, valuations remain at extremes, and sentiment remains overbought.

For fear of sounding like a broken record, this rally has gone on farther than any historical precedent without a minimum of a 10% correction…and this peaking is even more remarkable after the decline during 2008-2009 that went far deeper than historical precedent would have suggested as well.  Seen through another measure, market volatility (the fear index) has gone from the highest measured level in history during the 2008-2009 decline, to a low today only seen twice previously in the past 10 years.

These high amplitude swings are not only unprecedented, but they are also causing the mania of greed and fear to push farther than normal as well.  Whereas index investing was all but dead in 2008-2009 in favor of absolute strategies, today, the exact opposite is proliferating in popular media.

However, while the bull market edges forward, the economy is not keeping up, corporate profits are peaking and set to decline, central bank manipulation has run its course, and the underlying strength of this rally appears to be waning.  Chart I below illustrates how fewer and fewer companies are propping up the new highs in equity markets, a key sign that has historically preceded market tops and subsequent downturns (see Chart I below). 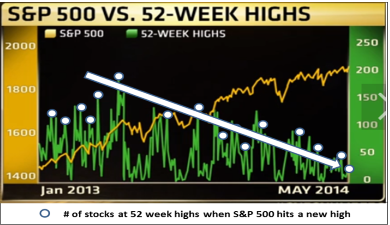 The latest “good news” offered up by Wall Street includes the hope that we are now reaching what “experts” call “escape velocity” in our economy, after what they explained to be a weather-induced negative-growth first quarter.  At the same time, we are told that markets are in a goldilocks environment because the economy is not overheating, so the Fed can keep stimulating.

Understood correctly, the consensus bullish position is the following: We have such little growth that markets should continue to rally because we will not remove the Fed Reserve medicine that is propping it up.  That doesn’t seem to represent the typical characteristics of “escape velocity”.

If we have such little real economic growth when monetary policy is so accommodating, we are left to ponder what will happen when the Fed has to stop accommodating and removes its stimulus, which it has already begun doing.  The Fed is only gently starting to remove its unprecedented Quantitative Easing program…and already the economy is slowing down considerably.  It is concerning to consider what will happen when they also have to raise interest rates.  Where will the sustainable growth come from then?

Consider this: The US market rose 30% last year, while total corporate profits only advanced 3%.  There appears to be a preponderance of exuberant speculators that have pushed valuations to levels nearly 60% over historical levels (measured by trailing 10yr PE).  That leaves us with a reasonably low expectation for additional returns from current levels without a meaningful correction that brings investment valuations down to more attractive levels.

The current reward-to-risk dynamics are at low levels last seen at the 2000 and 2007 market peaks.  This is a time for caution, a time for conservative positioning, and a time for discipline and patience, just as it was during the previous market peaks.

As always, we encourage you to pursue life’s dreams while we focus intensely on making the most responsible decisions for you with your hard-earned savings.