Investment markets continued surging to ever higher levels of overvaluation during Q2/2014, despite real hiccups in the global economy (see Chart I below). First quarter U.S. GDP contracted by 2.9%, Europe continued to languish in a state of sub-par growth, and even China continued to slow. 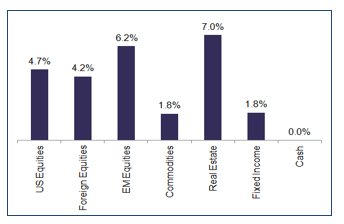 Investor’s seemingly blind love for markets, despite deteriorating fundamentals, appears to be the direct result of our Fed’s continued and unprecedented Quantitative Easing policy.  As is typically the case at market peaks, gain after gain continues to lure in cash from the sidelines at the same time  valuations become excessive and economic risks arise.  The current euphoria seems to have begun in early 2013, and continued through Q2/2014.

Stripping away the strong emotions of FOMO (Fear of Missing Out), we see that underlying valuation metrics are quite extended to the upside:

–          Market Cap to GDP is in its highest overvaluation zone, with only a 1% per year return expected over the coming 10 years.

Patiently Waiting For Better Values Ahead

US equities are badly in need of a corrective bear market to bring valuations back down to earth.  The only questions that remain are when exactly it will happen, and how far it will go down.

If we have a 15-20% correction, then we will have an improved investment landscape from the perspective of having lower investor sentiment levels (e.g. a better balance of buyers and sellers versus only buyers).  Remember that extremes of sentiment tend to mark turning points, so when we have excessive numbers of buyers, as is currently the case, there aren’t that many left to jump in, and risks rise for potential declines.  If we get such a decline, we will be inclined to put some of our client’s excess cash holdings back to work.  However, such a decline will still leave markets overvalued, and we may not want to jump back in too soon.

If we get a larger 30-40%+ bear market, we will not only have more attractive sentiment levels, but we will also have more reasonable valuations, and would be enticed to redeploy larger amounts of investor cash.  Nobody roots for these types of declines, as they tend to coincide with difficult economic times, but they are an inevitable part of our economic cycle and are a necessary cleansing of the froth that occurs during bull markets.

In the interim, we are seeing some better valuation opportunities overseas in the Asia-Pacific region, as well as in some commodities, especially gold.  Things can change quickly, so we will stay abreast of each investment opportunity, but we believe that select non-US opportunities have the chance to make a comeback sooner rather than later.

Sign of the Times: On July 10th, a story was posted about Cynk Technology Corp (Ticker: CYNK), an obscure social media company that had 1 solitary employee, a shaky business plan, no customers, no revenues, and no assets.  And yet, the euphoria of this peaking bull market has temporarily taken this unknown stock from $0 to a $6 billion valuation overnight!  This eerily reminds us of the Pets.com days of the dot-com boom and subsequent 90% bust.  History never exactly repeats itself, but it often rhymes.

As always, we encourage you to pursue life’s dreams with vigor, while we help take care of your growing nest egg.  Make life count!