US Markets Benefit from Fears Overseas 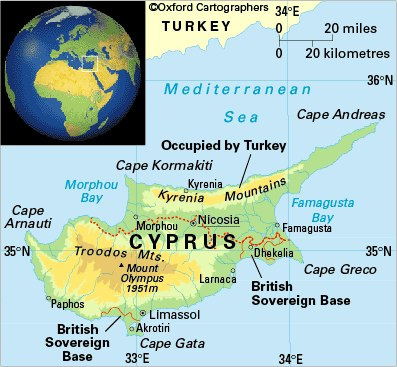 Most broad-based US equity markets closed the quarter at their all-time highs, surging higher as safe-haven money flows came in from overseas investors.  EU debt crisis fears resurfaced as Cyprus required a new bailout, which included the confiscation of approximately 60% of personal bank account values above €100,000.  This surprising move was the first time a direct hit was taken on “safe” savings accounts.  Consequently, a minor panic ensued amongst savers in other European nations, especially those who thought they could be next.  There were large money flows out of Europe and into US stocks, US Treasuries, and even $100 bills, which apparently make for good mattress stuffing.  Other areas of perceived risk were affected as well (e.g. Emerging Markets).  Across the board, international savers and investors were temporarily more concerned about return of capital versus return on capital.  As a result, US markets were bid up relatively higher in Q1 (see Chart I below).

Looking beyond Q1, we see a similar recovery pattern with US equities and Fixed Income having returned to previous highs in 2000 and 2007, while other markets have yet to fully recover to their peak levels (see Chart II below). 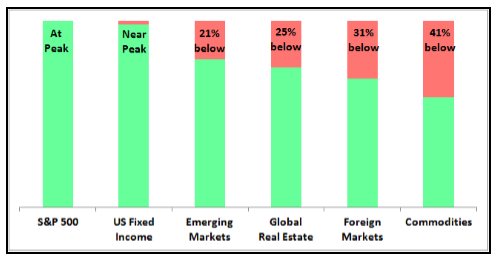 Heading into Q1, our indicators suggested that markets would continue to rally, albeit with the chance of becoming overheated during the quarter.  On the equity side, we kept healthy positions in the rallying US market, a sizable allocation to emerging markets, and a drastically underweight allocation in Europe.

In fixed income, we further reduced our high-yield bond holdings, and we reduced our short US treasuries position on continued Fed easing.  With our Volatility Timing Model, we exited all positions as indicators were mixed with no compelling signal in either direction.

Our predictions proved accurate early in the quarter as most markets continued to rise steadily.  In late January, we reduced risk in portfolios and raised cash, as our indicators flashed an overheated market reading.  This risk reduction helped us in foreign and emerging markets which pulled back 3-5%, while reducing our return in the US as it continued to surge higher.

During Q1, client portfolios once again had positive absolute returns, albeit trailing US indexes which performed best during this 3-month time period.  While our global exposure helped in Q4/2012, it impeded results during Q1/2013, especially in emerging markets where prices declined.  Our active rules resulted in a risk reduction mid-quarter which displayed mixed results.  In the US, we missed out on some additional upside, whereas overseas we avoided some declines.  Net-net, portfolios outperformed a global benchmark of assets on a relative basis for a second consecutive quarter.

Emerging clients (clients with assets < $150K at TD Ameritrade) had positive returns for the quarter as well, but were muted by larger emerging markets, materials, and gold positions, which all declined.  While we do make risk on/risk off moves for these portfolios, we are less active with sector changes in order to be sensitive to trading costs.

We are now entering the fifth year of a bull market in US equities, with prices rising off of the extreme market lows in March of 2009.  However, markets never rise in a straight line, with intra-year declines as the norm (see Chart III below).

Our most recent 4-year-old bull market has been no exception, with 8-20% corrections in each of the last 4 years.  As we discussed in our mid-quarter newsletter, while markets are driven long-term by fundamentals, they are driven near-term by more technical factors such as investor sentiment.  Currently, investor sentiment is extremely bullish, which typically is followed by a near-term cooling off period of 2-3 months.  As such, we expect US markets to temporarily decline in the near-term by 5-10%.

Thereafter, we believe this bull market will run up further, with an explosion in US energy exploration, a rebound in housing and consumer spending, a very healthy corporate sector, and undervalued stocks internationally.  However, we believe a near-term correction will be required before resuming the strong bull market run.  The excuse for a sell-off could be renewed European crisis, a slowdown in corporate profits, or something we don’t see coming.  When this downturn does occur, we will be prepared to reinvest client assets at better valuation levels, positioning portfolios for the next climb higher.

Over the next decade, the financial planning industry is expected to grow 32%.  In an effort to promote careers in the industry, TD Ameritrade is funding 10 individual scholarships valued at $5,000 each to deserving students enrolled in undergraduate financial planning degree programs.

If one of your family members or friends would like to apply for this scholarship, please click on the following link and submit your application before May15, 2013: TDA Scholarship Opportunity